What's on our mind?

The Rise of Black Friday in the UK

The Black Friday sales have become commonplace in the UK over the past 10 years or so. Each year UK consumers eagerly await the opportunity to help themselves to discounted goods from many of the UK’s top stores and online retailers.

In fact, due to the popularity of the event many retailers now offer discounts over the Black Friday weekend or indeed the entire week leading up to it. It’s no longer a single day event! However, some of the best discounts can still be found on the day after Thanksgiving.

The Origins of Black Friday

The term Black Friday originated in America and was first coined as early as 1869. However, originally it wasn’t associated with shopping but rather a financial crisis.

Two Wall Street bankers; Jim Fisk and Jay Gould came up with a scheme to get rich. They bought up a lot of gold, hoping to increase the wholesale price and make a huge profit.

Unfortunately for Fisk and Gould on Friday 24 September, 1869 the US gold market crashed, bankrupting many of their clients as a result. The day then became known as Black Friday.

It was around 80 years later that the phrase became associated with the period following the US Thanksgiving holiday.

During the 1950’s in Philadelphia the Friday after Thanksgiving was extremely busy with large amounts of tourists and shoppers descending on the city. The City’s Police department weren’t allowed to take any time off because of the crowds so the day was sarcastically known as Black Friday among police officers.

The term was disliked at first by shopkeepers in Philadelphia due to its negative connotations from the financial crash, however they soon adopted it and used it in relation to the Thanksgiving sales. It spread throughout the States and by the 80’s was widely used across the country.

It wasn’t until 2010 that the Black Friday shopping phenomenon arrived in the UK. Unsurprisingly it was Amazon that introduced the Black Friday sales to this country and that first sale was so popular that customers complained that items sold out too quickly and the traffic volumes actually crashed the Amazon website.

The popularity of online Black Friday sales meant that it wasn’t too long before in-store events started to take place. It was Asda that had the first in-store event in 2013. Discounts of up to 70% meant that crowds of shoppers were queueing outside many Asda stores. Inevitably things turned ugly, with fighting in the stores leading to some consumers requiring hospital treatment for broken bones.

The success of Asda’s Black Friday, despite the brawling, quickly caught on and many other shops introduced in store and online Black Friday deals with 2018 seeing the average person spending £346 on the sale. 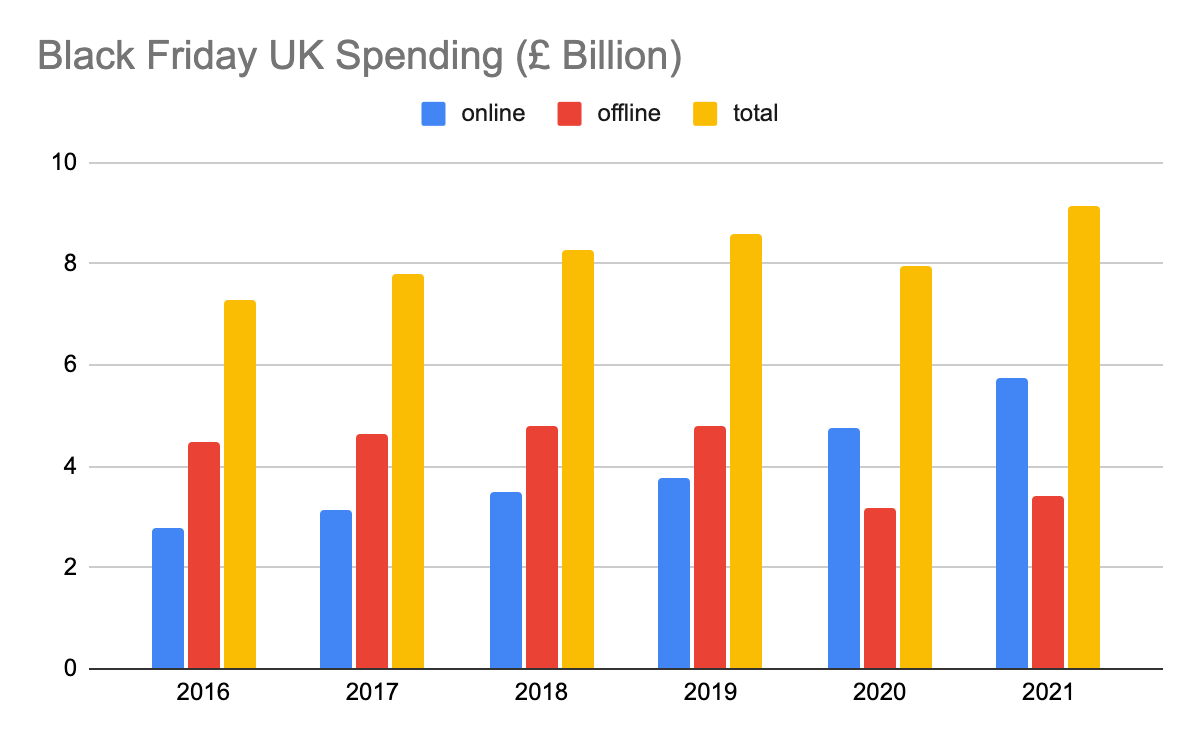 The rise of Ecommerce

Last year (2020) saw online sales overtake in-stores sales during Black Friday events for the first time. Unsurprisingly this was driven by the Covid-19 pandemic as the majority of shops were closed. The online sales were starting to catch in-store sales but the pandemic accelerated it and the trend is set to continue in 2021 with online purchases predicted to hit £5.74 billion!

The online growth has largely been driven by mobile devices. In 2019, 67% of online Black Friday traffic came from mobile devices, while 54% of orders received came through a mobile.

Why is Black Friday so popular in the UK?

Everyone loves a bargain and the timing of Black Friday sales event, means it can be a great way to pick up christmas gifts on the cheap. This year, more than ever, UK consumers are looking for ways to save money.

Consumer confidence has been knocked in 2021, due to rising living costs such as higher food and fuel bills driven by Brexit and the ongoing pandemic. With the financial uncertainty looking to continue well into 2022, this year’s event in the UK, is forecast to be the biggest so far, in terms of sales.

Should I get involved?

If you are a traditional retailer or own an online business there is benefit to offering your customers special deals as part of a Black Friday sales event. Due to the popularity of the event it is essential that any marketing campaign is planned meticulously and any deals offered are really eye-catching.

If you would like to speak to someone about planning a Black Friday campaign or any other type of digital marketing campaign, then we are always happy to help. We can provide the skills and advice you need to get in front of your target audience and help generate sales and leads. Get in touch today to find out more.